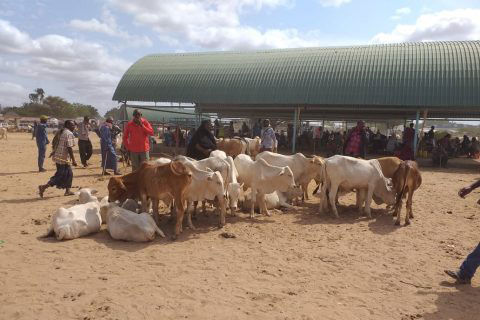 Recently, the FCDC livestock sector team visited Garissa County, one of our member counties, to assess the impacts of COVID-19 on the livestock sector. At the time of the visit, only 25 COVID-19 cases had been recorded in Garissa. As of 11th August 2020, there were 168 confirmed cases in the County.

Although there had been no major impact of Covid-19 on the market flows, access to inputs had declined as prices increased especially in vaccines and drugs (dewormers). The Kenya Veterinary Vaccines Production Institute reportedly had been unable to get some key chemicals for vaccine production.  Whilst sixty percent of drugs are provided by the private sector, most vaccines are provided by the government.

At the County department level, one main impact of COVID-19 was that the lockdown meant many professional county veterinary staff were stranded down-country and were not in the office. This meant that disease reporting had virtually stopped.

A discussion with some livestock traders, they estimated that trade had reduced by 60%, with each trader only sending one lorry per week compared to the normal three lorries (each lorry carries 20-25 cattle). They claimed the change is due to a reduction in demand for meat in Nairobi. They claimed that from the normal 6,000 cattle in the market every Wednesday, the number of cattle in the market had dropped to 2,000 cattle during the COVID-19 period.

The traders claimed that the price range had increased slightly from Ksh. 25,000 to Ksh. 28,000 for large female cattle, and Ksh. 35,000 to Ksh. 38,000 for large bulls. They put this down to the fact that the Somali border has been closed and imports of animals for slaughter have decreased thus prices have gone up. It was also noted that there is still a big demand for animals for traction.

Although there has been a 20-28% drop in the number of cattle traded, the price has remained stable. About 50% of the Garissa cattle trade is in young steers and animals (and thus a significant number of the buyers) are destined to go to Voi, Taita Taveta, Kitui, Machakos and Makueni counties for traction and draft purposes, and these counties have not been affected by travel restrictions or “lockdown”.

According to the traders, the small stock trade has increased from two lorries to three lorries per trader. Other traders suggested demand has decreased partly due to livestock owners being afraid to bring animals to market.  However, the information from traders was not considered reliable.

The direct impact of county responses to control COVID-19 in Garissa has been relatively small. The curfew has closed eateries in Garissa but had relatively little impact on market prices locally. There has not been any lockdown in Garissa – so movement is normal, although restrictions on the number of people in public transport may have increased travel costs – however, enforcement of such rules seems to have been relatively relaxed.

The lockdown and prevention of movement of animals to Nairobi city have had some impact as some traders were hesitant to move animals to Nairobi, however, large traders sending animals for slaughter have not been affected as the movement permit states the destination purpose as slaughter. Some buyers planning to buy animals for breeding may have been put off, but this seems to be a very small number as the number of animals for sale for breeding/traction are still high.

In terms of livestock trade, the biggest impact was on the volume of animals traded. Although traders claimed approximately a 40-50% reduction in cattle destined for slaughter due to the curfew and closure of restaurants and eateries and fewer buyers from Nairobi, it is more likely to have been a 25-30% decrease depending on species, and on average the drop in value across the cattle, sheep, and goats has been 22%.