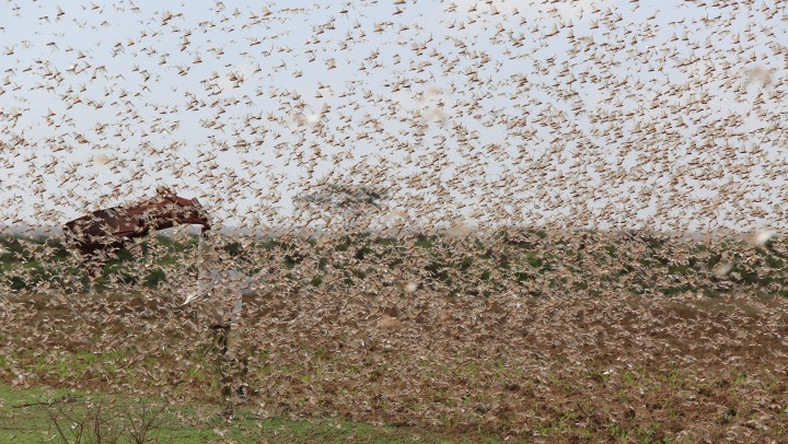 The FCDC member counties have expressed fears of new large invasion of desert locusts from the Horn of Africa – many times bigger than the January 2020 outbreak – and the hatching of second-generation eggs in the next 3 months. Nearly 1 million people have so far been affected by the devastating desert locusts, which are the worst to hit Kenya in 70 years. The news of the approval of $43 million by the World Bank will go along way into saving the rapidly worsening situation.

A number of methods have been employed across the FCDC region: manual beating shouting, motorbike hooting, spraying using knapsack sprayers, vehicle-mounted sprayers, and aerial spraying. They have all reported that aerial spraying is the most effective in controlling the locusts, although target missing is common.

We have received reports on the scope, response, and mitigation measures from seven of our member counties. In Isiolo County, all the 10 wards were affected between January and February, while in the March-May period, it affected only Oldonyiro and Burat wards. The county has so far aerial sprayed 40 swarms. The county suffered five percent (5%) forage destruction estimated at Kshs. 100 million, affecting approximately 30,000 people.

Samburu County saw the last swarm on 13th May 2020. The swarms have affected 15 wards, with the most affected being Nyiro, Ndoto, Waso, Wamba West, Nachola, Loosuk, Suguta Marmar, Angata Namyukie, Baawa, and Wamba East. The county has recorded over 100 swarms, with an average of 7 swarms daily. 45% forage destruction valued at Kshs. 200 million and affecting an estimated 55,000 people has been reported.

In Wajir County, the last swarm was seen in February 2020. The County has suffered an infestation of 300,000 hectares of forage and 190 hectares of cropland. Wajir estimates the cost of destruction of the locusts at Kshs. 500 million, and affecting 300,000 people. So far, the County in collaboration with other partners has aerially sprayed 38 swarms and chased away 21 swarms.

In Mandera, the last swarm was seen in February 2020. Seven wards have been infested, with 200,000 people directly affected. It is estimated that the locusts have caused a 40% forage destruction.  The county has reported that the coordination was weak, partly because aerial surveillance or spraying cannot be done due to security threats.

Garissa County is fighting the second generation of swarms in 21 sites.  The most affected areas are Sankuri, Nanighi, and Iftin wards. 6,800 hectares of land has been invaded, translating to 30% browse, 15% grassland, and 10% of crop damage. Garissa estimates the cost of destruction of the locust at Kshs. 28 million, and 120,000 people affected.

In West Pokot County,  the last swarm was seen in West Pokot in April. 15 wards have been affected, and the County has suffered 5% destruction estimated at Kshs. 1 million with approximately 20,000 people affected.

In terms of needs, the counties require support in the following areas: